Many different kinds of handpumps are frequently installed on hand-dug wells and boreholes in rural areas, including many drought-prone areas. They facilitate a contamination-free method to extract water. Most pumps are positive displacement pumps and have reciprocating pistons or plungers.

Household pumps
Low-cost lifting devices such as a bucket and rope, windlasses or simple handpumps on shallow dug wells are sufficient and sustainable sources for small communities or single households. In some cases the wells may not be perennial and may need to be supplemented by communal sources.

Village pumps
For small communities of up to about 1,000 inhabitants, properly constructed hand-dug wells – which provide a safe water supply all year round, equipped with simple but reliable and easily maintainable direct action handpumps – are a good option. If wells cannot be dug by hand because water tables are too deep or for other reasons, boreholes may have to be drilled. In such cases good quality boreholes equipped with reliable and robust handpumps, which can be easily maintained, are the most cost-effective community choice. The number of users per pump should be 200 to 300.

Small towns
The investment cost per capita is lower for communities of between 1,000 and 5,000 inhabitants if small piped systems with pumps powered by electricity from the grid or diesel engines are installed instead of handpumps. Only one or two high-yield wells will be required. In the size range of 1,000 to 2,000 inhabitants, piped systems with solar pumps are attractive, especially if the pumping lifts are low. Contrary to grid or diesel-powered systems, solar pump systems have no energy costs, but their application can be limited due to the high cost of photovoltaic panels – thus the number of panels needed is a determining cost factor.

The majority of handpump types used worldwide belong to the group of reciprocating pumps. The water is lifted by a piston that is raised and lowered inside a cylinder that has a footvalve. The piston (or plunger) is moved by a pump rod connected directly to a T-handle or a lever handle at the pump head. In some pump types, a flywheel with crankshaft is used to create the reciprocating movement of the piston.

Included in the group of reciprocating handpumps are:

The Rower Pump is a suction pump in which the piston is directly activated. Photo: RWSN.

In a suction pump, the cylinder is above the water table, usually near the top of the pump head. The rising main extends below the water table. When the pump is operated, during the upwards stroke it appears that water gets “sucked up” through the rising main into the cylinder. In fact, the atmospheric pressure forces the water into the area of low pressure underneath the piston. The theoretical limit to which the atmospheric pressure can push up water is 10 metres (m). In practice, suction pumps can be used to lift water up to about 7 or 8 m.

A suction pump needs to be full of water before it can be operated. That means the pump needs to be primed: water is poured into the pump head by the operator. This is necessary every time the pump is emptied by a leaking footvalve (in practice all footvalves leak a little, especially in inexpensive suction pumps – so the pump may need to be primed every morning, or even several times a day). Thus, the danger exists that the well can be contaminated through polluted water used for priming.

The advantage of suction pumps is that the cylinder is normally above ground, and thus easily accessible. Maintenance involves replacement of seals and valves, operations that can be easily performed with few tools. 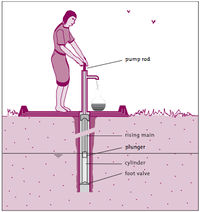 Direct action handpumps are usually made of PVC and other plastics, and are installed on boreholes of limited depth. A plunger is attached to the lower end of a pump rod, beneath the groundwater level. The user moves the pump rod in an up-and-down motion, using a T-bar handle. On the up-stroke, the plunger lifts water into the rising main, and replacement water is drawn into the cylinder through the foot valve. On the downstroke, the foot valve closes, and water passes through a one-way valve in the plunger and is lifted on the next upstroke.

Because direct action handpumps have no mechanical advantage, such as the lever or fly-wheel of a deep-well handpump, direct action pumps can only be used to depths from which an individual can physically lift the column of water (about 12 m). However, the mechanical simplicity, low cost and lightweight construction makes these pumps well equipped to meet O&M objectives at the village level.

The pump is operated by moving a handle up and down. As the plunger is located underwater, no priming is needed. Adults, and even children, can pump the water, although if the water table is further than 5 m deep, this may be difficult for children. The pump stand and site must be kept clean. 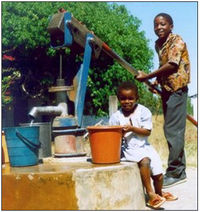 The Bush pump is a lever action pump that can handle heavier usage by many people. Photo: RWSN.

Most deep-well handpumps are of the lever action type. The increased length of the water column in deep boreholes requires more effort to draw water and the lever of the handle makes the operation easier. Besides the conventional handle, there are also pump designs, which use a flywheel to operate a crankshaft for transforming the rotation into an up-and-down movement.


1. above-ground components like pump head, pump stand and handle, which are usually made of welded mild steel components, preferably with a corrosion protection of hotdip-galvanized zinc layer.
2. down-the-hole components like rising main, pump rods with plunger, cylinder and footvalve.

The most commonly used rotary handpumps are the rope pump and the progressive cavity pump (very difficult for local technicians to maintain). Note that although some reciprocating pumps use a circular action mechanism to drive the pistons, they are not categorized as rotary.

Diaphragm pumps are pumps employing a flexible diaphragm that is expanded and contracted to displace water. The advantages of diaphragm pumps are that they are easy to install, because no heavy mechanical parts are used. They can also be made corrosion-resistant through the use of plastic hoses instead of metallic rising mains.

The disadvantages are that diaphragm pumps need high-quality rubber diaphragms, which are costly to buy and replace, and they have a relatively low efficiency because of the energy needed to expand the diaphragm on every stroke. In addition, the working principle is relatively complex so mechanics and caretakers need to complete comprehensive training programmes.

Handpumps should be installed only when a viable sustainable handpump option has been shown to work in the area. Depending on pump standardization in the country and depth of the water table, it is preferable to choose simple technologies that do not need specialist parts and that are repairable locally. The rural poor prefer to have cheaper, shorter-life technologies despite the need to maintain them more frequently.

The rope pump is used by 25% of the rural population in Nicaragua. The technology was disseminated in a very short time over the whole country and part of Central America with more than 25,000 pumps installed in handdug wells and drilled wells. It is the national standard pump for the water & sanitation sector.

For guidance on making cement under drought conditions, refer to: Concrete production and drought.

Historically, handpump functionality has been negatively affected by numerous issues related to user operation & maintenance, which in turn has resulted in a large percentage of handpumps that do not work. However techniques to improve sustainability of handpump installations are possible. Centralized management of spare parts stock seems to be preferable to private sector supply chains for a variety of reasons related to the difficulties of sustaining handpump spares.

Maintenance of direct action pumps, for instance, is relatively simple and can be taught to users or caretakers, sometimes within a few hours. For preventive maintenance, usually only one or two people are needed. Daily activities consist of checking the pump performance and the appearance of the water (if it is cloudy with silt, the borehole must be cleaned). Annually, the pump should be taken apart and checked. Small repairs include replacing worn cupseals and washers, straightening bent pump rods, and replacing corroded lock nuts. To carry out major repairs (e.g. a broken pump rod or rising main, cracks in the welding of metal parts), skilled help may be needed. O&M can be organized at community level, and since maintenance is relatively simple, good organization will result in a reliable service.

The term VLOM (Village Level Operation and Maintenance) was coined during the World Bank / UNDP Rural Water Supply Handpumps Project which, from 1981 - 91, considered the availability around the world at that time of handpump technologies and maintenance systems.

A series of performance tests were undertaken involving laboratory testing of 40 types of handpump and field performance monitoring of 2700 handpumps. It was concluded that centralised maintenance systems were the cause of many problems and that village level maintenance was desirable, but only feasible if the design of the pump made it possible.

Initially the VLOM concept was applied to the hardware, with the aim being to develop pumps which were designed to be:

Subsequently, the VLOM concept was extended into software and organisational matters. Thus the "M" in "VLOM" has become "management of maintenance", for the success of a project was generally seen to be dependent on a strong emphasis on village management.

Therefore the following elements were added:

The application of VLOM principles, when considering pump selection, often involves compromising one principle to take advantage of another. A handpump with a low rate of breakdown might be thought preferable to another with a higher rate. However, a handpump that breaks down monthly, but can be repaired in a few hours by a local caretaker, is preferable to one that breaks down once a year but requires a month for repairs to be completed and needs replacement parts to be imported and skilled technicians to be available.

The Afridev handpump was developed during the course of the project to embody all of the VLOM design principles. Production began in Kenya in 1985 and modifications were made after field trials in Kwale in Southern Kenya.

Improvements continue to be made. Skat (Swiss Resource Centre and Consultancies for Development) acts as a repository for the design drawings and specifications for the benefit of users and manufacturers of the handpumps.

Analysis of costs for handpumps to the commercial Simple Pump: COMPARING SIMPLE PUMP TO OTHER PUMPS, by Simple Pump.

Tests were done on some handpumps that are documented in A Sustainable Technology: Research and Development During Water Supply and Sanitation Decade, by UNDP - World Bank Water and Sanitation Program. Refer to the following pages of this document: