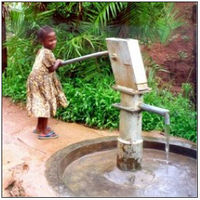 The U3M Pump is a conventional lever action handpump developed in Uganda. The "M" stands for modified, so the U3 pump has been modified in the U3M version. It is designed for heavy-duty use, serving communities of up to 300 persons. The maximum recommended lift is 45 m.

The configuration includes an “open top” cylinder; the piston can be removed from the cylinder without dismantling the rising main. The footvalve is retractable with a fishing tool. The pump head has similar configurations as the INDIA Mark III Pump and the “down hole components” are similar to the Afridev components. The cylinder follows the Afridev Pump configuration. The plunger uses the 50 mm open top India MK III brass design.

The U3M Pump is a public domain pump defined by RWSN specifications. The U3M Pump is fully corrosion resistant. It is easy to install and has excellent potential for community based maintenance.

The U2 and U3 handpumps use Galvanised Iron (GI) riser pipes and rods and have experienced widespread corrosion problems due to aggressive groundwater. The U3M was later modified to use uPVC pipes and SS rods. Recent problems with breaking plastic foot-valves for the U3M led to the introduction of some brass foot-valves. Due to the different versions of the U-series pumps there is now some degree of non-uniformity and uncertainties over spare part supply. However, the widespread familiarity with these models and in-country availability of spares are positive developments. 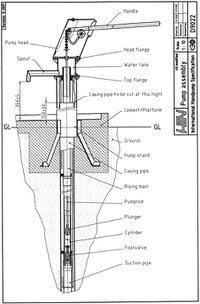