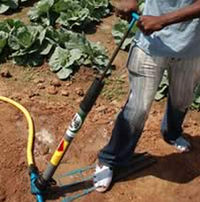 The MoneyMaker Hip pump ease of use. Photo: [2]

The MoneyMaker Hip pump comes with an input hose and an output hose. Photo: Food Security and Innovations for Africa’s Agriculture

The MoneyMaker Hip Pump is unique to KickStart; developed to create a lower cost and lighter weight, portable pump. It debuted in stores in 2006. Sales and marketing efforts began in 2008. The new pump sells for about $30, is very light (only 4.5 kg or less than 10 pounds), and can irrigate an acre. A great deal of work went into designing a super efficient valve box, but the genius of the design is a simple pivot hinge

By attaching a “Hand Pump” to a hinged platform, we’ve changed the body mechanics-- allowing users to use their leg, body weight, and momentum, rather than the small muscles of the upper back and shoulders. This allows the pump be easily used to irrigate an acre or more.

The Super MoneyMaker pump is an alternative, larger pump also made by KickStart.

Mahmoud Guindo has struggled for years to make ends meet. The 48-year-old Malian from Dogon Country was a victim of living on credit and borrowing from friends. He moved to Mali’s capital Bamako eleven years ago in search of work to support his wife and children. He began working as a security guard in a private residence and gardening a 150 sq meter plot of land not far from his home. But he says it was never enough to cover his basic needs of food, clothes and medicine for his four children.

Mahmoud’s average salary as a security guard is 200,000 CFA per year, or approximately $US400. To increase his annual income, he decided to build a bigger garden, but he was skeptical about how he would water a larger plot of land. Then he said he saw an advertisement about Kickstart's Money Maker irrigation pump, known locally as “nafasoro,” on television and decided to buy it. He didn’t have the money, so he approached his boss for a loan. Both men agreed it was a tangible asset that would provide a profitable and quick return of investment.

Mahmoud bought the pump in October of 2008. Since then he has almost doubled his annual income from $US400 to $US700 by selling fruits and vegetables.

The additional cash flow is allowing him to pay off some debts while being able to provide for his family.

KickStart’s micro-irrigation pumps are available for distribution throughout Africa, Asia, and Latin America.

Super MoneyMaker pumps are available for purchase in multiples of two (2) with two (2) pumps being the minimum order.

The minimum MoneyMaker Hip Pump order is 5 pumps. Individual pumps can be picked up in person at our offices or retail shops in Kenya, Tanzania, and Mali.