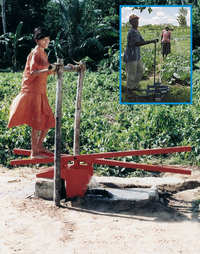 The treadle pump is a foot-powered water pump widely used in Asia and spreading in Africa. It consists of two metal cylinders with pistons that are operated by a natural walking motion on two treadles.

There are several variations of the treadle pump:

The treadle pump was designed by the Norwegian engineer, Gunnar Barnes in the 1970’s. It was first developed and used for irrigation in Bangladesh in the late 1970’s.

In the 1980s, International Development Enterprise (IDE) initiated a campaign to market the pumps to smallholder farmers. Over the course of 12 years, 1.5 million treadle pumps were purchased by farmers, increasing the farmers income by $150 million annually. The cost of the treadle pump scheme was $12 million, compared with conventional dam and canal systems, which would have cost $1.5 billion to irrigate a similar area. The treadle pump programme in India won an Ashden Award in 2006.

The treadle pump is also being promoted in Africa where it is installed by organizations such as Kickstart (former Approtec), who brand the treadle pump under the name MoneyMaker, and Enterprise Works. Models of the treadle pump such as the MoneyMaker and the Soka-pump are now widely used for small-scale "spray" irrigation.

Currently, over 2 million treadle pumps have been installed worldwide. Up to 1.3 million treadle pumps are in use Asia, and some 35,000 in Eastern Africa. They are being produced in 300 local workshops worldwide and used by more than one million poor rural families that otherwise could not have afforded an irrigation pump.

Because a treadle pump is a suction pump, the depth from which water can be drawn is limited to 7m.

Distribution: about 2,000,000 treadle pumps were sold in Bangladesh and about the same number in India.

Treadle pumps can be manufactured locally in simple metalworking shops. The treadles and support structure are made of locally available, inexpensive material, such as bamboo. All components (or junction box) are made from mild steel; Piston-mild steel with plastic seal (cup Seal); foot valve-leather flap; rising main-PVC pipe or bamboo; various types of screens are used.

The installation of the Treadle pump is easy and does not need any lifting equipment or special tools. The drillers who sink the tube well with the sludger method also install the pump.

Two pedals are connected to the two pistons. The pump is powered by shifting the weight from one pedal to the other, lifting the pistons. Water is supplied through a hose which draws water from a borehole or surface water.

All household members are able to operate the pump, allowing farmers to make efficient use of family labour.

If designed correctly, treadle pumps can be easily maintained with standard replacement parts available in local markets at a low cost. All repairs can be done without the use of tools.

The treadle pump is very cost-effective. Its low cost makes it accessible to even very poor farmers who can use it to grow dry-season vegetables for home consumption and for sale. In Bangladesh, a pump costs US$ 20. On average, farmers are able to generate more than US$100 per year in extra income. Income from treadle pumps adds US$100 million to the GNP of Bangladesh annually. Production and sales are sustainable now without external aid. With this technology, many families have increased their income. Some farmers who started with this pedal pump have now bought a motorized pump.

The Treadle Pump is widely used in Asia, and increasingly used in Africa.