Bunds (also called teras) are small barriers to runoff coming from external catchments (and possibly to a field where crops are to be grown). Bunds slow down water sheet flow on the ground surface and encourage infiltration (groundwater recharge) and soil moisture. There are different types of bunds. A rectangular type, where land is "bunded" on three sides, with the fourth side left open to capture runoff from an elevated area and a contour type, where bunds are created in rows along the contour of a hillside. The bunds consist of small stone or earthen walls. A small channel on the inside of the bunds is made to let the water run along. Excess water drains along the tips of the outer arms (rectangular type). These spillways may improve the efficiency and reduce maintenance costs of the teras. The base bund can be 50-300 meters long, while the arms are usually 20-100 meters long. Bunds are not generally built to eventually extract water, but rather to add soil moisture or contribute to groundwater recharge.

Bund design has to be adjusted according to local conditions. They can vary in design and include non-enclosed systems (e.g. trapezoidal bunds where water escapes around the edges), and enclosed systems (e.g. bunded fields where water enters via a channel and escapes from a spillway in the bund once the field is flooded). In certain site-specific examples, they are used to create small artificial glaciers which helps release melt water slowly, so as to adjust to short sowing seasons.

In West Africa the technology is widely used in valley bottoms.

1. Clay areas – bunds made from soil with high clay content develop leaks through pipes in the bund structure which form due to cracks when it dries.
2. Proximity to large water courses.
3. Sites needing extensive leveling.

When a region with bunds floods, strengthen the existing bunds by raising them several feet, otherwise breaches are possible. This is especially important when bunds are used to protect crops or urban/residential areas. 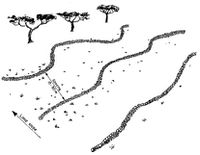 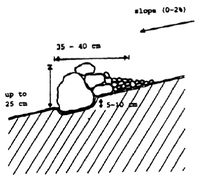 Local people should have a good degree of control in programme implementation, and the focus should be on appropriate techniques that can be operated and maintained using local resources. However, social/institutional constraints are not the only (or even primary) concern when building bunds – technical considerations are often overlooked. A few lessons learned are listed here which might apply generally:

Stone bunds: There is limited, ongoing repair required as the stones are not vulnerable to erosion. However, silting behind the stone bunds requires that the stones to be relaid from time to time. Care must be taken that overtopping of the bunds does not lead to erosion on the downstream face, with subsequent gully formation and undercutting of the bund.