Capturing rainwater runoff from a nearby road was a technique created by Musyoka Muindu in Kyethani Location, Mwingi District. He had been steadily developing his system since he began in 1993. This was largely as a result of hands-on experience and observations, but with some help and training from the MOARD (Ministry of Agriculture and Rural Development) in soil and water conservation. His technology was reported by Mwarasomba and Mutunga (1995) in their survey of positive experience in Kenya’s ASAL (Arid and Semi-Arid Lands) areas.

His proximity to the tarmac road means that his farm is very accessible to visitors. Around 800 farmers have gone to visit Nzamba Nguu, and he welcomes visitors with open arms – and with his visitor’s book.

The significance of this initiative is that Musyoka has managed to adapt MOARD soil conservation techniques (terracing using fanya juu and fanya chini methods) and to modify these into a viable water harvesting system, suitable for dry areas. There were– and still are -no precise technical guidelines for this type of water harvesting in Kenya. Here then is a model that is worthy of detailed study, which can act as a stimulus to other farmers to innovate.

Musyoka calculates that production of his main crop, maize, doubled after the runoff harvesting system was introduced – due mainly to the extra moisture available. Increased farm income is an associated benefit. It is estimated that soil loss approximately halved. Supplementary benefits recorded include increased fodder production.

Make sure the usage of the road is understood, so as to prevent pollutants in the runoff. Water from road catchments should not be used for domestic consumption if the water from murram and dirt roads contains dung and other pollutants, or the water from tarmac roads because it contains tar, which is harmful to peoples' health. 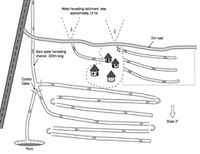 This map illustrates how you locate the channels coming from the road. Click image to zoom in. Drawing: UNDP

This technology is categorized under WOCAT (World Overview of Conservation Approaches and Technologies) as a combined structural / vegetative measure. Bunds and channels are stabilized with perennial grass. Its purpose is primarily to increase soil moisture for crop production, and it achieves impact through water harvesting. In soil conservation terms it reduces land degradation and soil erosion by water.

Runoff is led to the farm from the tar road in a main excavated channel of about 300 metres length, which cuts through a neighbour’s farm. There are also supplementary channels which lead runoff from a hillside. The estimated catchment area is (at least) 10 hectares in size. This supplies water to a cultivated area of about 5 ha. The main channel leads runoff into the farm through an initial fanya chini structure (a channel with the earth thrown downslope). When the runoff reaches the end of the channel, it is diverted round into a similar structure, which leads the water in the opposite direction. To make a simplification, runoff water is conveyed in a zigzag fashion, or ‘reticulated', through the farm. At certain points the farmer has put water control gates in specific channels, to select the direction of the flow.

The structures that transport the water within field are mainly fanya chini but some are fanya juu (embankment above the channel). In all cases the embankment is made of earth, excavated from the channel. The channel’s dimensions are (approx) 1.0 m deep and 1.0 – 2.0 m wide; with embankments that are 1.5 m high and spaced at 18 m apart. These dimensions are well above those recommended for standard fanya juu/ fanya chini design (Thomas, 1997). The structures are on a slight grade (sited by eye) to allow the water to flow. The average field slope is 3°. The approximate vertical interval between structures is thus 0.9 m. The embankments are stabilized with grass or perennial crops such as banana or sugar cane.

An approximate construction input of just over 100 days per hectare is stated for the hand labour involved. That represents the infrastructure of bunds and channels. Other costs (equipment, seedlings etc) are minimal. The annual requirement for maintenance is estimated at 10 person days per hectare. This is less in a dry year, but can be much more due to damage caused by extra runoff during heavy rains. Clearly, while it is a low external-input system, this is a relatively expensive technology, and particularly demanding on labour. Nevertheless because the system is directly linked to increased production, these are costs which can be recovered quickly. The benefits compared with investment costs are recorded to be ‘positive’ in the short term and ‘very positive’ in the longer term. 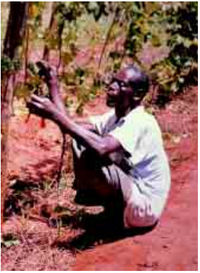 The road runoff system of capturing rainwater was created by a farmer. Photo: UNDP

One improvement regarding adoption of the system would be to assist farmers in layout and design. These road runoff harvesting systems can be very effective, but if not well designed or managed may lead to high maintenance requirements and an increased erosion hazard. An idea for improving Musyoka’s system, from the WOCAT data collectors who visited him, is that he could make his channels shallower to allow more water to spillover into his fields, rather than it being lost through deep infiltration. In terms of research, this is one of the systems most in need of validation and full description, as water harvesting is extremely important in the drylands of Kenya. And here is a system that works.

Adoption by other farmers

The farmer has designed systems for two neighbours: indeed the main channel from the road passes through the farm of one of these, with whom he works co-operatively. The total adoption is recorded to be around 40 farmers. They are all now harvesting runoff from tracks or hillsides in this vicinity. However, several of those who have taken up his initiative have not managed to guide the runoff water through the farm as effectively as Musyoka has done.