Channels take water from a riverbed to a collector well in the riverbank. They are often screens (slotted or perforated pipes) that are inserted horizontally into a riverbed, but also infiltration galleries can be made from channels with graded gravel as long as sediments are not washed into the collector well. Where screens are used, the screen diameter tends to be larger than that used normally for jetted/driven wells.

Riverbeds having catchments of flat farmland usually contain fine textured sand, that can only yield a maximum of 100 litres of water from 1 m3. of sand, i.e. an extraction rate of 10%. Stony riverbeds containing boulders and fractured rocks have the lowest potential for water extraction due to seepage caused by the boulders and fractured rocks. This seepage is, however, beneficial for replenishment of boreholes situated on riverbanks.

Effects of drought: Can dry up.
Underlying causes of effects: Less recharge of aquifer due to less rainfall; Increasing population & water demand; Size of aquifers – e.g. limited sand volume; Wells not sunk deep enough into water table; Incorrect siting; Graded gravel around pipe not correctly done.
To increase resiliency of WASH system: Increase volume through construction of groundwater dam; Sink wells/pipes deeper; De-water wells during caissoning within the water table; Construct during the latter half of the dry season; Site in riverbeds that are dry for part of the year, where water remains in the riverbed throughout the dry season; Increase flow by use of porous concrete & perforated pointed steel pipes driven horizontally into the aquifer (riverbed wells) and graded gravel (infiltration galleries & jetted wells); Site in a degrading river section where there is no deposition (infiltration galleries); Put graded gravel around pipes to minimize clogging and increase flow. 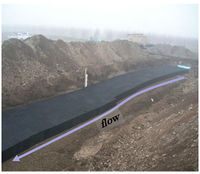 How deep is the water table?

Some rural people and most well-diggers know that water can only be found at certain places in riverbeds. They can also give a rough estimate on how deep they have to dig before reaching the water-table.Their knowledge is based on the fact that certain species of trees and vegetation must have roots reaching down and into the water-table in order to survive droughts. This traditional information (based on Kenyan plants) is compiled in the table below as an example. Make sure to find the unique regional plants specific to your site area.

Since the trees below must have their tap root in the water table, the depth of a water-table can be found by knowing the depth of the tree’s tap root. A rule of thumb states that the tap root of a tree has a depth equal to about 3⁄4 of the height of the tree. The height of a tree can be found by measuring the length of the shadow the tree is casting on the ground and comparing it with the length of the shadow of a stick 100 centimeters long. The two measurements should be taken in the sunshine of early morning or late afternoon when the shadows are longest. For example: If the stick’ shadow is 80 cm long, the ratio is: 80/100 = 0.8. If the tree’s shadow is 12 m long, then the tree is: 12 m x 5 / 4 = 15 m high and the tap root and water level is at: 15 m x 3⁄4 = 11.25 m depth. 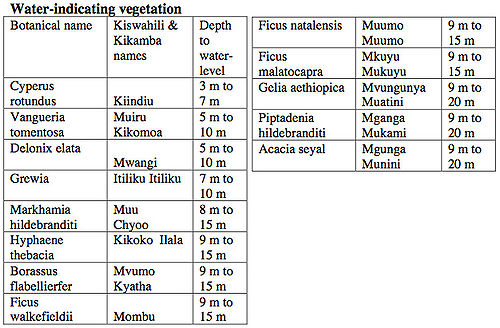 Vegetation that tells you how deep the water is beneath it. Click on chart to zoom in.

Below is an example of the costs of labour, materials, and transportation to install a river infiltration system. Currency is in the Kenyan shilling. 100 Ksh = 1.20 USD.


Find out more about installing a riverbed infiltration system, Chapter 4 of Water from Dry Riverbeds. Waterforaridland.com. 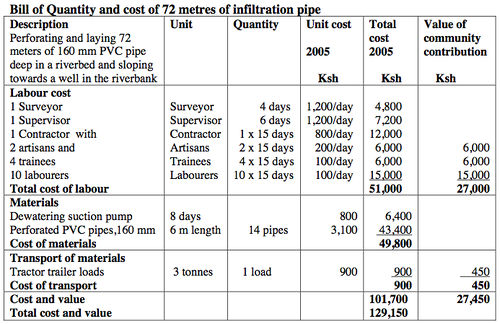