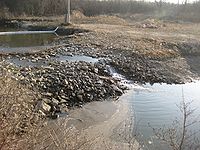 Permeable rock dams consist of long, low rock walls with level crests along the full length across valley floors. This causes runoff to spread laterally from the stream course. This is a floodwater harvesting technique that spreads and retains floodwater runoff for improved crop growth, as well as controls gulley erosion. Permeable rock dams can be considered a form of ‘terraced wadi’, though the latter term is normally used for structures within watercourses in more arid areas.

Permeable rock dams for crop production can be used under the following conditions:

This system is generally used across relatively wide and shallow valleys. This technology is appropriate for regions with less than 700 mm annual rainfall, where gullies are being formed in productive land. This is particularly suited to valley bottoms with slopes of less than 2%, and where a local supply of stones and the means to transport them is available.

Each dam is usually between 50 and 300 m in length. The dam wall is usually 1 m in height within a gully, and between 80 and 150 cm in height elsewhere. The dam wall is also flatter (2:1) on the down slope side than on the upslope side (1:2), to give better stability to the structure when it is full. A shallow trench for the foundation improves stability and reduces the risk of undermining. Large stones are used on the outer wall and smaller stones internally.

A typical rock dam providing erosion control and water supplies to plots of 2 to 2.5 ha costs about US$500 to 650 for transportation of material and about 300 to 600 person days of labour.

Several organisations have been involved in the promotion of this technology in Burkina Faso. The structures are labour-intensive and require provision of mechanised transport for moving the quantities of stone required. Villages that request application of this technology usually pay half of the transportation costs, contribute all of the labour, and manage the dam. Where rock dams have been installed, a spill over into the construction of smaller rock dams by individual land owners has been seen.

Governmental or agency involvement is comprised primarily of provision of technical advice needed during the construction stage. More recently, villages have been asked to form a land resource management committee to serve as a focal point for coordination of land and water resource management activities with extension agents. This committee draws up a land use management plan that provides the planning context for dam construction and other environmental protection projects.