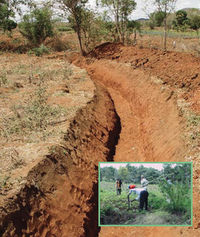 At its simplest, contour trench construction is an extension of the practice of plowing fields at a right angle to the slope. Contour trenches are ditches dug along a hillside in such a way that they follow a contour and run perpendicular to the flow of water. The soil excavated from the ditch is used to form a berm (a narrow shelf) on the downhill edge of the ditch. The berm can be planted with permanent vegetation (native grasses, legumes) to stabilize the soil and for the roots and foliage in order to trap any sediment that would overflow from the trench in heavy rainfall events.

Contour trenches are not irrigation channels, rather they are used to slow down and attract runoff water, which then infiltrates into the soil. Small scale contour trenches can also be used within field level. The water that infiltrates can be used as soil moisture for crops cultivated after a rainfall event, directly for pumped irrigation, or extracted from shallow wells in the area.

Contour trenches specifically help control flooding and capture water from floods. If rain event is expected to be massive, plant vegetation along the outer edge of the contour to stabilise the trenches and prevent erosion. 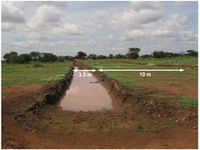 In order to efficiently capture runoff in a catchment through appropriately sized trenches, the following information and analysis is needed:

Experience from Vietnam showed that in 5 out of 7 shallow wells that were near the trenches with water tables of between 3 and 18 metres below ground level, showed an increase in water levels after rainfall events of over 60mm because of infiltration from the contour trenches. It seems that recharge of groundwater is not certain according to local sub-surface conditions – in Vietnam, water levels in 2 out of the 7 wells near the trenches were unaffected. This is probably due to certain geological layers blocking infiltration. So it is always a possibility that trenches will not affect water levels.