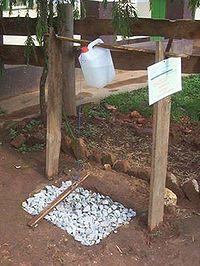 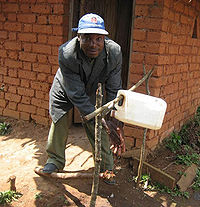 The Tippy Tap in use.

The Tippy Tap is a simple device for hand washing with running water. A container of 5 liter with a small hole near the cap is filled with water and tipped with a stick and rope tied trough a hole in the cap. As only the soap is touched with the hands, the device is very hygienic. A gravel bed is used to soak away the water and prevent mosquitos.

A first version of the Tippy Tap was designed by Dr. Jim Watt of the Salvation Army in Chiweshe, Zimbabwe, and was called the Mukombe. The Mukombe is a type of gourd or calabash, which can be used as the can. But many vessels can be used in the same way, such as those used for cooking oil or milk. Tippy taps are promoted by UNICEF and WaterAid in Uganda, and are used in India, Mozambique, Tanzania and Zambia.

Experience has shown that it is better to use a piece of metal wire than using a piece of rope, as the rope will often break after a while.

Different models are being used, all under the name "Tippy Tap".

Recommended to install in schools and family houses next to the latrine.

The construction costs of the Tippy Tap are in the range of 0$ if second hand materials are used, 2-4 US$ if new materials are purchased.

Mozambique
In the Nampula region in Mozambique, families made 300 copies of the Tippy Tap after the NGO DAPP installed 20 examples.

Tanzania
In the Southern Highlands region of Tanzania, the NGO Shipo installs examples of the Tippy Tap, after which families make copies. Most of the Tippy Taps are installed near latrines of schools.

Zambia
Some 100 are in use in Zambia, Monze region. More follow-up needed. Sometimes a problem with acquiring good containers.