Solution of the week 9 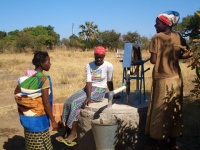 A rope pump mounted on a well in Zambia. Using the rope pump allows the well to be covered, which vastly improves the water quality. Photo Henk Holtslag

In the water sector, as elsewhere, good ideas can be surprisingly old. One such old idea is the rope pump, which is over 2000 years old and was used in ancient China. A rope pump consists of a pipe that reaches down to the water, a rope or chain through the tube, washers attached to the rope that fit snugly inside the tube, and a wheel on top to draw the rope with washers through the pipe. The water is held between the washers in the pipe, and is pulled to the surface.

In its many ancient incarnations, the rope pump has been named the ball-and-chain pump, Chinese liberation pump, Noria pump, paternoster pump, chain pump, and many others. Its original design used tubes made of wood (hollowed-out tree trunks, for example), and big balls of leather or wooden plates. These earlier variations of the rope pump were used extensively for irrigation in agriculture and in the large and leaky wooden-canvas-hemp ships of the day, to pump out any unwanted water and prevent sinking.

In the 70s, R. Van Tijen of the Dutch Demotech organisation reintroduced the pump, and started using modern materials such as PVC pipes and rubber car tires. It was introduced in Africa as "rope and washer pump" as a low lift pump for irrigation and family wells in the 70s. It never really took off, probably for reasons as its low lift capacity, its "Stone Age" image, and the lack of involvement of the local private sector.

A rope pump mounted on a well in Zambia. Using the rope pump allows the well to be covered, which vastly improves the water quality. Photo Henk Holtslag

This completely changed in Nicaragua, where the rope pump was introduced in 1986. The Dutch organisation SNV worked on technical improvements and first dissemination, after which the local company Bombas de mecate SA made it a commercial success through sales to the private sector, and later on to NGOs and government. Now the rope pump provides over 35% of the rural water supply in Nicaragua and is produced by some 20 local workshops. A host of models has been produced, including rope pumps powered by bicycle, windmills, animal traction, and small engines. 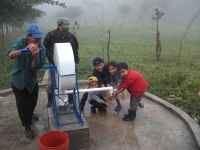 Nowadays, an estimated 100.000 rope pumps are used by 4 million people, of which around 70.000 in Nicaragua, 15.000 in neighbouring countries, 2.500 in Cambodia and India, and 15.000 in various countries in Africa. Particularly successful is the "Elephant pump", which consists of a rope pump surrounded by a concrete structure. The Live Earth partner Pump Aid has placed 5.000 Elephant pumps in Zimbabwe and Malawi, with about 80 added each month. NGOs such as Water Aid, Care and Unicef are using rope pumps in their programmes.

To help the successful introduction of the rope pump in a new area or country it is strongly advised to start with promoting the rope pump as a family pump or as a pump for irrigation used by larger groups of farmers. If it works well, usage can be expanded to communal pumps, in cooperation with local or national governments. In all cases it is strongly recommended to use updated manuals combined with training by professional organisations. After all, simple is not easy.