A solar water heater is any system that uses the thermal energy of the sun to heat water. They are usually aimed at heating water to a temperature hot enough for washing clothes, washing dishes, and personal hygiene, but not hot enough to cook with straight away. However, as long as it is clean, the hot water can also be used in cooking to save time and fuel.

The basic idea behind the solar water heater is a piece of black piping, filled with water, and laid in the sun for the water to heat up. To heat up more water you increase the number of pipes to make a “collector” and add a tank to store the heated water in. The whole system is insulated to minimize heat-loss. Water is cycled through the collector several times to raise the temperature. Some systems use electric pumps to pump water through the system, but this increases the cost. Alternatively, water can be made to pass through the pipes without a pump using the thermosyphon effect.

Thermosyphons use the fact that hot water rises above cold water. In a passive thermosyphon system, the tank is always above the collector. As the water in the pipes heats up, it rises up into the top of the tank, causing cold water from the bottom of the tank to flow down into the collector. The flow continues until the water in the pipes and the tank is at the same temperature. One-way valves are fitted to stop water flowing back the other way when the temperature drops at night.

A solar water heater can be on any kind of roof. Photo: Sustainablog.org

There are 165 approved India solar water heater manufacturers/suppliers (as at 01 August 2011) and over 1000 companies capable of installing them, and these figures are growing each year, particularly in areas such as Bangalore, Pune, Delhi, Hyderabad, Mumbai and Chennai.1 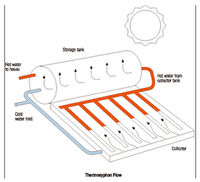 Tips on maintaining your tank

The cost will vary widely around Africa, depending on the size of the system and whether the materials used have to be imported. Import taxes and taxes on business sometimes add to the expense. Governments could help promote solar water heating by reducing taxes for businesses selling solar water heaters. In South Africa in 2005, a 70 litre solar water heating system cost R3000 (US$455). Larger systems with electric back-up cost up to R10000 (US$1520).

The Ministry of New and Renewable Energy is responsible for maintaining the standards of solar water heating in India and they provide approval for a number of efficiency test centres around the country such as the School Of Energy Studies , University of Pune.

These efficiency centres conduct solar water heater tests at regular intervals that conform to the specifications set by the Bureau of Indian Standards (BIS).

Eskom launched a rebate program for solar geysers in 2008. To qualify for a rebate, all systems need to undergo testing carried out by the South African Bureau of Standards (SABS).

Each one tested by the SABS receives a rating (Q-factor), which indicates the kilowatt-hours (kWh) of electricity it's expected to save on a typical day and the units ability to produce hot water.