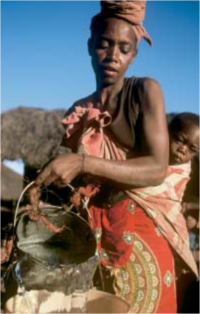 Photo: The Right to Water

“Access to safe water is a fundamental human need and, therefore, a basic human right. Contaminated water jeopardizes both the physical and social health of all people. It is an affront to human dignity.” ~ Kofi Annan, United Nations Secretary-General.

A rights-based approach is about improving wider systems of governance, which determine progress towards the vision of a world where everyone has access to safe water and sanitation. It implies a change in the power dynamics between those without access and the duty bearers. It aims to bring about sustainable and long term structural change in policies, procedures and laws, as well as changes in attitudes and behaviours.

This implies the following key components:

Why does defining water as a human right make a difference?

Water for Life. Water and Sanitation as a Human Right.
Right to Water: Guayaquil, Ecuador

Ensuring that access to sufficient safe water is a human right constitutes an important step towards making it a reality for everyone. It means that:

Approaching development from a rights perspective informs people of their legal rights and entitlements, and empowers them to achieve those rights. Rather than seeing people as passive recipients of aid, the rights-based approach puts the individual at the centre of development.

Some 80% of those who have no access to improved sources of drinking-water are the rural poor - who may also have less access to political and lobbying processes than their urban counterparts.The ‘‘cost” of lack of access to safe water is reflected in the day-to-day investment of time to collect water - time that is not then available for productive activity, household or child care or education; and in the burden of disease arising from water collection - including injury and water contact diseases such as schistosomiasis.

While water is important to every community, many indigenous groups rely on waterways and water bodies for their traditional livelihoods, including fishing, whaling, and sealing.When access to fresh water is compromised, often indigenous rights to self-determination and occupation are impinged upon, as are their water-reliant traditions. 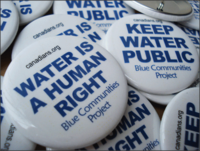 The right to water may be realized, partially or fully, as a result of a person’s own actions, government assistance or a combination of both. However, government activities may impinge upon people’s existing entitlements to water. For instance, a government institution may pollute a river required for drinking-water supply; a local authority may unfairly disconnect the water supply of residents; a law may prevent access by a group to a traditional water source or piped water.

A government is not the only actor that can endanger or restrict the right to water. Individuals and corporations have the potential to interfere with a person’s or community’s water supply. For example, pollution from factories, farming or sewage can greatly damage the quality of water used for drinking.A private individual can deny access to a river needed for washing, or a corporation may increase prices for water services to unaffordable levels.

In essence, the duty to fulfill requires that governments take active steps to ensure that everyone can enjoy the right to water as soon as possible.This encompasses the obligations to facilitate, promote and provide.The obligation to facilitate requires the State to take positive measures to assist individuals and communities to enjoy the right.The obligation to promote obliges the State Party to take steps to ensure that there is appropriate education concerning the hygienic use of water, protection of water sources and methods to minimize water wastage. States Parties are also obliged to fulfill (provide) the right when an individual or a group are unable, for reasons beyond their control, to realize that right themselves by the means at their disposal.

The following project make use of rights-based approaches: