The Tungu-Kabiri community hydro project. The Tungu-Kabri micro-hydro power project in Kenya is a cheap, sustainable and small-scale technology that harnesses the energy of falling water to make electricity. Photo: microhydropower.net. 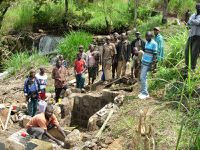 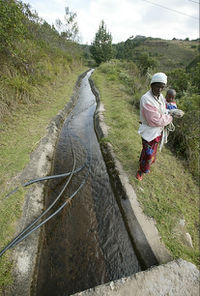 Micro-hydro Southern Africa. A woman and child standing by a constructed channel used for the micro-hydro system. The water is also used for irrigating local farmers crops via plastic pipes. Photo: Practical Action.

Micro hydroelectric power is different from typical hydroelectric power because it doesn't attempt to significantly interfere with the flow of the river. Typically rated at a maximum capacity of 300 kW hours, the micro hydro systems don't dam rivers, but instead divert a stream of water that flows downhill through a pipeline dropping into the turbine. The turbine then generates electricity which can be stored in batteries and transported to where villagers may need it most.

Communities and hydropower
Hydropower installations up to 300 kW of installed capacity are able to provide essential energy services to many rural areas in Africa, including mechanical power for services like maize grinding and electricity connections for individual households and small businesses. For most rural African communities, it could be many years until the grid comes near enough to their towns to be practical. But most rural Africans also live closer to a river than to the grid. What is needed is greater support for helping communities tap into their local power, especially technical help, financial assistance and guidance in how to operate and maintain the system. A microhydro plant, while relatively low cost and low tech, may still strain local resources. Although the costs of microhydro are very site specific, communities can help bring down the capital required by in-kind contributions specifically for the civil works required (diversion weir, intake, canal, etc.).

Unlike traditional power stations that use fossil fuels, micro-hydro generators have practically no effect on the environment. And because they don’t depend on dams to store and direct water, they’re also better for the environment than large-scale hydro-electric stations.

In fact, by reducing the need to cut down trees for firewood and increasing farming efficiency, micro-hydro has a positive effect on the local environment.

Looking specifically at small hydropower development, the following barriers can be identified: 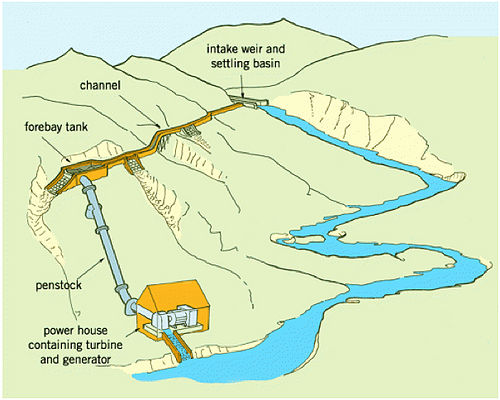 A micro-hydro power set up. Click image to zoom in. Drawing: Practical Action.

The cost varies from approximately £1,200 to £4,000 per installed kW, when using appropriate technologies, which are much cheaper than using conventional approaches and technologies.

In the examples examined in the five countries, the capital cost of micro hydro plants, limited to shaft power, ranged from US$714 (Nepal, Zimbabwe) to US$1,233 (Mozambique). The average cost is US$965 per installed kW, which is in line with the figures quoted in some studies. The installed costs for electricity generation schemes are much higher. The installed cost per kW ranged from US$1,136 (Pucará, Peru) to US$5,630 (Pedro Ruiz, Peru) with an average installed cost of US$3,085.

An important observation is that the cost per installed kilowatt is higher than the figures usually cited in literature. This is partly due to the difficulty analysts have in establishing full costs on a genuinely comparative basis. A significant part of micro hydro costs can be met with difficult to value labour provided by the local community as ‘sweat equity’. Meaningful dollar values for local costs are difficult to establish when they are inflating and rapidly depreciating relative to hard currencies. In addition, there is little consistency in the definition of boundaries of the systems being compared, for instance, how much of the distribution cost, or house wiring, is included, how much of the cost of the civil works contribute to water management and irrigation, and so forth.

In Tanzania
Church missions have been at the forefront with regard to installing microhydro systems. An example is the Matembwe village hydro scheme, which powers a vocational center run by a mission. The system has an installed capacity of 150 kW and supplies electricity for commercial uses and individual households in two villages located 5 km apart, with the bulk of the electricity being used at the vocational center. For the first few years, two village committees were responsible for managing the project. As the capacity of these committees was found to be insufficient, management was handed over to the Matembwe Village Co. Ltd., who manages the vocational training centre. The ownership of the scheme is shared by the Diocese, an NGO, the village authority and the District Authority. Since the inception of the hydro project, the national grid has reached the villages concerned and the villagers now have the choice between electricity from hydropower or from the grid, with most of them staying with the cheaper local hydropower option.