This zone is constantly changing due to the dynamic interaction between the land and sea. Land-based activities along the watersheds have proven to have impacts on the sea. Upstream deforestation will decrease water discharge and result in sedimentation in the river body and sediment will not deposit to the sea. In the midstream, pollutants from industries and sewage treatment plants have poisoned aquatic biota, including aquaculture that is the source of livelihood of the local community. Activities such as canalization and sand river mining led to decreased sedimentation downstream. In the midstream where industry, canalization, sand river, mining, tourism, and settlements occur produce both solid and water waste causing sea pollution. These are worsened by the conversion of mangrove forests into fishponds in the downstream leading to the loss of natural protection from waves and erosion.

Similarly, the dynamic processes in the sea such as storms, waves, and currents will affect the intertidal area and land. Waves coming inland, instead of being attenuated by mangroves that are the natural barriers, directly hit the coastlines leading to coastal erosion. In the long run, this will cause coastline retreat that will destroy not only human settlements but also fishponds along the coastlines that are the livelihood of the local community.

This shows the inter-connectedness between processes in land and sea. Thus, a thorough comprehension of such interactions is essential in planning for coastal zone management. 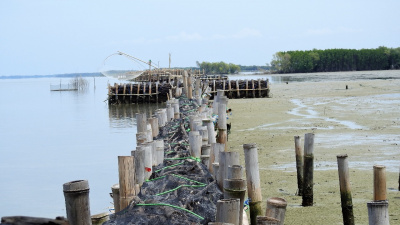 There is no “one size fits all” solution to address coastal problems. The problem for each area is context-specific depending on the system and root causes of the problems. An intensive and integrated analysis of the problem and the system of the area is needed to determine the best solution. The Solution can be formed in two types; non-structural and structural measures.

The non-structural measure is defined as a measure not involving physical construction that uses knowledge, practice or agreement to reduce risks and impacts (UNISDR 2009: 28).  Non-structural measures can be formed in particular through policies and laws, public awareness-raising, vulnerability map, Emergency plan map, training, and education.”. The structural measure can be classified in hard and soft structures according to how its constructed and used. Application of hard structure can be easily found in many areas in Indonesia as follows: 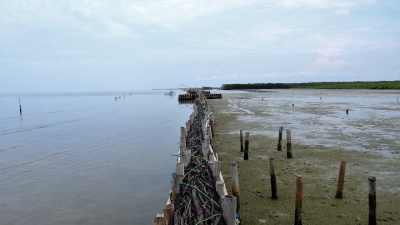 These structures are highly visible man-made used to stop or disrupt natural processes. These structures are costly, short-term solutions and often they can have a negative impact on the environment. Installing hard engineering structures in one coastal location can have detrimental effects further down the coast. On the other hand Soft structure is trying to protect the coast rather than trying to stop natural processes. It uses ecological principles and practices, therefore making less of a negative impact on the natural environment. Soft engineering is less expensive to implement but sometimes has a high cost in maintenance, and creates more long-term, sustainable solutions than hard engineering projects. Following are an example of a soft engineer:

Permeable structures have been implemented in Demak, Central Java as part of Building with Nature pilot project since 2015.

Ministry of Marine and Fisheries who also part of the building with nature consortium expanded the implementation of the permeable structures to Gresik, East Java.

Other examples of building with nature measures can be seen in the Building with Nature in the City website.

It is important to have a sustainable measure, which can be harmonized with the environment to enhance the ecological, economics and society.