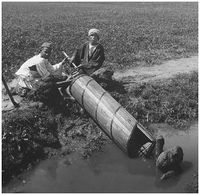 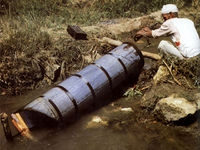 An Egyptian farmer turning an Archimedes screw by hand to irrigate a field. Photo: Helen and Frank Schreider of the National Geographic staff.

The Archimedes Screw (named after a Greek mathematician) is though to have been around since 250 B.C.E. However, archaeological evidence has led others to posit its earlier invention in Assyria (modern day Iraq) or Egypt; Archimedes simply improved upon an earlier design.

The Archimedes Screw is basically a large helix, open at both ends and encased within a watertight cylinder. It operates with the cylinder somewhat tilted from vertical. When the open lower end of the cylinder is placed in water and the screw is turned, water trapped between the cylinder and the threads of the screw rises. Successive revolutions will raise the water thread-by-thread until it emerges at the top of the cylinder.

It can be used where the water needs to be raised less than 1.5 meters (5 feet). In such cases, it is perhaps the most efficient of the ancient methods, because two men can raise an enormous volume of water in less than an hour. The Archimedes Screw has been widely used over the centuries, especially to raise irrigation water and for land drainage, often being powered by people or animals. Besides being of simple construction, it has the additional advantage of being able to move water that contains mud, sand, or gravel.

There are two types of the Archimedes Screw:

- Because the flights are welded to the outer cylinder, there is no slippage (backflow). If the pump is stopped, the water is retained between the flights. The lower bearing (a self-aligning set of rollers mounted above the highwater level) is easily accessible. The rollers carry most of the radial load.
- Because there is no slippage, the efficiency of the pump is very high and stays high even at low discharge.
- A massive concrete structure is not needed.

The Archimedes Screw is still used today in some limited applications (usually electrically-powered), and can range in size from a quarter of an inch to nearly 4 meters (12 feet) in diameter. A large screw or banks of screws may be used to pump rainstorm runoff or to lift water or wastewater, for example.

Archimedes' screws, now called screw conveyors, are also used today primarily to propel dry bulk materials. However, if you do not have access to a generator pump and need a low-tech solution to raise water, it doesn't get much easier and low-tech than an Archimedes' screw. 1

The distribution, today, of the water lifting Archimedes Screw is in the Nile-delta region of Egypt.

A major advantage of these pumps is variable pumping at constant speed, because the output (up to design capacity) is controlled by the sump level and equals the influent flow rate. The disadvantages are the inducement of turbulence, the release of odors and other volatile substances (if using for wastewater), and the relatively high initial cost (if using metal components, but not wooden). But when comparing costs with those of other types of pumps, consider the cost of the total system, including all piping, wet or dry wells, screens, fittings, valves, variable-speed controls, and other accessories as well as operating and maintenance costs. Note that operators like screw pumps because the good ones, when properly installed, are so trouble-free. 2

This small scale Archimedes Screw is a model to understand the concept of the water lifting device. The ones built by farmers are made of bamboo or other wood, usually. A working Archimedes Screw can be made using local (or cheap) materials in your region. The following device is an open screw.

This simple screw pump can be viewed as a series of ramps around a central axle. As you turn the PVC pipe, you carry the water in small lifts from one ramp to another until it pours out of the top. It is much easier to pump water with a conveyor screw than to lift the water vertically, just like walking along a winding mountain path is easier than climbing straight up.