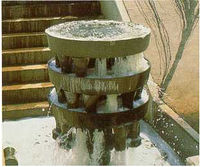 Aeration is a unit process in which air and water are brought into intimate contact. This process is also referred to as aerobic treatment. The process happens naturally in the wild, for instance turbulence increases the aeration of flowing streams. In industrial processes, water flow is usually directed countercurrent to atmospheric or forced-draft air flow. Aeration ponds are also used in centralized water systems. The contact time and the ratio of air to water must be sufficient for effective removal of the unwanted gas.

Aeration as a water treatment practice is used for the following operations:

In developing countries the common method for aeration is by splashing the water over trays or by blowing air bubbles through the water.

Among the equipment normally used for aeration, the most common are some special nozzles which direct thin jets of water into metallic plates to produce fine sprays exposing water to the atmosphere; cascade-type aerators which create turbulence in thin streams of water flowing down; tray-type aerators consisting of some five perforated trays, increasing in size from top to bottom, where water (falling from tray to tray) is exposed to air; and diffused air aerators, which are tanks where air is bubbled upwards from diffuser pipes laid on their floor. The latter method is the most efficient; the amount of air needed may be regulated; the tanks are normally about 4 metres deep and have a retention time of about 15 minutes. Among all the methods, however, trays are the most commonly used because of their low cost, simple operation and reasonably high efficiency. 1

Temperature significantly affects the efficiency of air stripping processes. Therefore, these processes may not be suitable for use in colder climates. Theoretically, at 68°F the carbon dioxide content of the water can be reduced to 0.5 ppm by aeration to equilibrium conditions. This is not always practical from an economic standpoint, and reduction of carbon dioxide to 10 ppm is normally considered satisfactory.

Two general methods may be used for the aeration of water. The most common in industrial use is the water-fall aerator. Through the use of spray nozzles, the water is broken up into small droplets or a thin film to enhance countercurrent air contact.

In the air diffusion method of aeration, air is diffused into a receiving vessel containing counter-current flowing water, creating very small air bubbles. This ensures good air-water contact for "scrubbing" of undesirable gases from the water.