This is a floodwater harvesting technique called controlled flooding, where the water diverted from a river with the help of diversion structures and canals is spread evenly over a large surface area, known as spreading basins, where it is used for recharging groundwater, irrigation, filling ponds, and watering grazing land. The concept is that a thin sheet of water flows over the land but at minimum velocity in order to avoid disturbing the soil cover. This includes spate irrigation, but also standard channel irrigation which takes river water via channels to fields.

Site in areas of high volume and intensity river flows where conventional irrigation structures are not feasible (spate systems should probably be promoted in areas where the practice is already in use).

Spreading basins are perfect for areas with floods. They are built to transfer excess water away from rivers, so that uncontrollable floods don't happen in unwanted places. However, in the event of too much flooding, the spreading basin must be large enough to handle the increased volumes of rain. Plus, with intense rain events, the higher velocities might be too much for the soil of the basin and create a washed out effect or likely just runoff before infiltrating. In this case, additional vegetation enhancement (to help the soils absorb more water), wetland enhancement, levee protection, and/or additional water storage will be helpful.

Spate floods are variable and difficult to predict using conventional rainfall-runoff models because rainfall is often not correlated to runoff in ephemeral rivers that feed spate systems. Large scale permanent structures built to resist the hostile conditions of full river flow are economically unfeasible and also still prone to damage and siltation. Although siltation brings nutrients, it also creates one of the major difficulties with spate irrigation – sediment load tends to be between 3-10% in seasonal rivers with particle size varying from silt to boulders. Silt causes problems of silting up channels, raising farmland and causing river courses to change direction and miss the diversion structure altogether. There are also large quantities of floating debris which can cause problems for intakes.

The following are recommended:

Systems should be self-reliant with regards to routine operation and repair, but some backstopping from public sector units is a good idea: 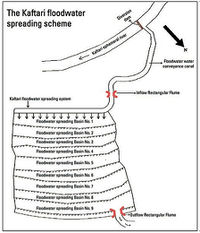 More than 70% of the suspended load has settled in the system. This will inevitably lead to clogging and reduction in efficiency in the system, but also an improvement of the soil for agriculture purposes. Additionally, the managed aquifer recharge improves the quality of groundwater, as the EC of floodwater is much lower than that of the groundwater (0.3-0.4 versus 2.0-9.0 dS/m).