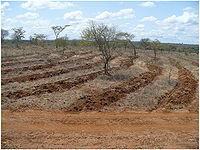 Contour ridges, sometimes called contour furrows or micro watersheds, are used for crop production. Ridges follow the contour at a spacing of usually 1 to 2 metres. Runoff is collected from the uncultivated strip between ridges and stored in a furrow just above the ridges. Crops are planted on both sides of the furrow.

The yield of runoff from the very short catchment lengths is extremely efficient and when designed and constructed correctly there should be no loss of runoff out of the system. Another advantage is an even crop growth due to the fact that each plant has approximately the same contributing catchment area.

Since the contour ridge technique implies a new tillage and planting method compared with conventional cultivation, farmers may be initially reluctant to accept this technique. Demonstration and motivation are therefore very important. On the other hand, it is one of the simplest and cheapest methods of water harvesting. It can be implemented by the farmer using a hoe, at no or little extra cost. External support is limited to a minimum. Alternatively it can be mechanized and a variety of implements can be used. When used by a farmer on his own land, the system does not create any conflicts of interest between the implementer and the beneficiary.

Contour ridges for crop production can be used under the following conditions:

The distance between the ridges should be adapted depending on rainfall amount.
This low cost technology has the potential to increase food security in below normal rainfall years.
The relatively low planting density discourages farmers, especially in a good year, and the technique does not work well on steep slopes. Contour ridges are limited to areas with relatively high rainfall, as the amount of harvested runoff is comparatively small due to the small catchment area. 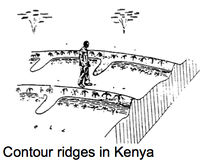 The overall layout consists of parallel, or almost parallel, earth ridges approximately on the contour at a spacing of between one and two metres. Soil is excavated and placed downslope to form a ridge, and the excavated furrow above the ridge collects runoff from the catchment strip between ridges. Small earth ties in the furrow are provided every few metres to ensure an even storage of runoff. A diversion ditch may be necessary to protect the system against runoff from outside.

Ridges need only be as high as necessary to prevent overtopping by runoff. As the runoff is harvested only from a small strip between the ridges, a height of 15 -20 cm is sufficient. If bunds are spaced at more than 2 metres, the ridge height must be increased.

The cultivated area is not easy to define. It is a common practice to assume a 50 cm strip with the furrow at its centre. Crops are planted within this zone, and use the runoff concentrated in the furrow. Thus for a typical distance of 1.5 m between ridges, the C:CA ratio is 2:1; that is a catchment strip of one metre and a cultivated strip of half a metre. A distance of 2 metres between ridges would give a 3:1 ratio. The C:CA ratio can be adjusted by increasing or decreasing the distance between the ridges.

Minimal maintenance is required if the ridges are properly constructed initially. Maintenance involves reconstruction of any lines and ridges that might have collapsed.

With human labour, an estimated 32 person days/ha is required. Using machinery, the time requirement is reduced, but the costs are increased to an estimated US$100/ha. This technology is considered low cost, although the rate of its adoption has not been high.

While contour ridges can be made by hand or by animal draft, implementation can also be mechanized. This is particularly appropriate for larger scale implementation. The Integrated Programme for the Rehabilitation of Damergou, Niger is testing ways of bringing degraded land back into productive use, where annual rainfall is only in the range of 300 mm. The contour ridge technique for crop production was introduced 1988.

For this purpose, a special plough was designed to form the ridges, usually in straight lines (though approximately on the contour), at a distance of 2 metres apart. The machine is reversible, and the sub-soil beneath the furrows is ripped to increase infiltration rates. Cross ties are formed by the machine at an automatically controlled spacing. It is reported that one hectare can be treated in an hour, and up to 1,000 ha in a four month season by a single machine. The involvement of the villagers and implications for land tenure however need to be carefully taken into account as the programme develops.