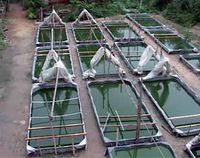 Spirulina is an aquatic micro-organism often referred to as an algae, though it more closely resembles bacteria. It is used as a food supplement to combat malnutrition. 1 gram of spirulina is said to be as nutritious as 100g of spinach or carrots, and is cheaper. It has an extremely high protein content, with 60-70% of its dry weight consisting of a balanced mix of various essential amino acids. Further it is very rich in beta carotene (to produce vitamin A), iron, vitamin B12, ganna-linolenic acid and other micronutrients. It has no cell wall and is therefore very easy to digest.

It improves physical growth as well as cognitive development. It also improves immunity, and therefore helps in fighting and preventing HIV/AIDS and anaemia. Studies show it is also effective against arsenic poisoning, a condition which is extremely hard to combat.

It can be consumed directly as the paste which is harvested or dried. This is highly useful for cheap, local distribution in rural areas. Further it is also suitable to be produced industrially for the middle class. This is in the form of pills sold in pharmacies or combined with various food products such as rice, milk products, energy bars, candy, noodles, etc.

Spirulina was rediscovered during a European scientific mission in Chad, as a traditional food of the locals called dihé. It was a blue-green, dried cake made of a micro-organism which grew in the natural alkaline lagoons found in this region.

It was found that people had been consuming this for centuries not only in Chad, but also in Mexico and other areas. Even though people here had extremely poor diet, they did not suffer from malnutrition.

Malnutrition is a pathological condition caused by the lack of essential nutrients such as amino acids, proteins, and vitamins. Hence it is caused not only by lack of food but also due to the poor quality of the food available in less economically developed areas. It can prevent physical growth as well as cognitive development and cause many other problems, such as immune dysfunction. UN figures show that over 250 million children suffer from malnutrition.

Spirulina has very high micronutrient content, is easy and cheap to produce locally. It is therefore a very realistic and also sustainable solution to the problem of malnutrition as opposed to food fortification or distribution programs. Fortification programs try to improve the quality of food by for example adding vitamin A and D were to milk and margarine. These are not always effective since this food is usually not available to the people in rural areas who suffer most. Similarly food distribution programs are very effective during short term emergencies, however are not long term solutions to malnutrition. Spirulina production on the other hand can effectively combat malnutrition and simultaneously provides business opportunities for locals, particularly women.

Spirulina grows in solutions of specific minerals with the correct chemical balance and a pH of 8-11. There are various different recipes for this, depending on the budget available and the conditions. It needs a minimum of 20˚C to grow substantially, though a temperature of 35-37˚C is most effective. A good amount of sunlight is useful if the culture has a reasonable temperature and concentration. At very low temperature, low concentration of culture, or a culture that is struggling to grow. 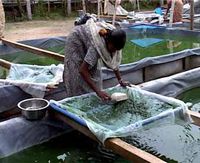 Extruded spirulina laid out to dry.

A concentrated spirulina culture is then used to seed the pond containing culture medium. This can be obtained from culture floating on an existing pond, or recently harvested. This is mixed into the culture medium and allowed to grow. It should be regularly agitated using an electric pump or by stirring manually. The temperature, pH and concentration of algae should be monitored. Once the concentration increases to about 0.5g/L (use a Secchi disk to measure) it must be harvested. This can be done by simply filtering it through a cloth to obtain a “biomass” of about 10% dry matter per litre. The biomass obtained is then pressed in a cloth to produce a kind of cake. The culture medium can then be reused, by adding any of the ingredients which were used up by the Spirulina.

Spirulina is most nutritious in its wet form. However this lasts at most for a few days if refrigerated, and only a few hours at room temperature. Hence if it needs to be transported or stored it must be dried. If dried and packaged well it can be stored for at least a year without losing nutritional value. However if dried it acquires an unpleasant smell and taste, and is inconvenient to use. It can then also be combined with various other food products or simply packaged on its own.

The production of Spirulina requires manufacturing of a tank. The size of this depends on the scale of production, and the number of tanks. 1 tank of 18m2 produces approximately 150g of Spirulina per day.

Build up the walls, approximately 30cm high with packed earth, bricks or planks. The material to be used depends on the weather conditions, and presence of rodents, termites etc. Cover the sides and the bottom with one polyethylene sheet. Create a temporary compartment (200L) to produce Spirulina needed to seed the whole tank. Reinforce the walls with metal/bamboo frames and cover with a second plastic sheet.

The culture medium and tanks need to be protected from contamination by foreign algae, insects and toxicity. Also the level of the pond and amount of nutrients needs to be maintained by regularly replacing the fertilizers and water. Further the temperature and pH need to be maintained. Details on how this is done can be found in the manual. It is useful to replace a small amount of the solution with a completely fresh amount, to prevent deterioration of the culture medium.

An estimate for the total costs however is 5-7 euros per kg of spirulina. The main costs involved in the local production of Spirulina are labour, nutrients, packaging, capital and administration. The costs of course depend on the local availability of materials.

In india for example, the cost of building a tank of 18m2 is 166 euro and a feeding programme here produces Spirulina at a cost of 0.01euro per child per day.

One example of a successful business initiative revolving around Spirulina production can be seen in Madurai, India. Here 15 women run a production facility of 40 Spirulina tanks. They work to produce 150kg of Spirulina per month.

They pack the Spirulina in dry form of 2 gram sachets and sold to two local NGOs. The Spirulina is also combined with millet, jaggery, and sesame to produce “chikki” a type of energy bar to feed 2000 children per day from slums in the neighborhood. At this scale of production, the facility is extremely efficient, and produces at a cost of 0.01 euro per child per day. They currently do not sell in the open market, as this requires more management and marketing skills, however this is being worked on.

Production and distribution
of spirulina
Retrieved from "https://akvopedia.org/s_wiki/index.php?title=Spirulina_farming&oldid=38397"