a. limit and control the development of cultivation activities taking place in disaster-prone areas and high risk of disaster areas as well to minimize potential disaster events and potential losses due to disasters and climate change;

b. developing metropolitan cities and big cities by optimizing the use of space vertically and compactly;

c. develop green open space with an area of at least 30% (thirty percent) of the urban area;

d. limiting the development of built-up areas in metropolitan areas and big cities to maintain the level of service for infrastructure and facilities in urban areas and maintain the function of surrounding rural areas;

e. develop cultivation activities that can maintain the existence of small islands;

f. limiting and controlling cultivation activities in locations that have high conservation value;

g. determine damaged and polluted locations to be restored;

h. controlling the balance of carrying capacity and environmental capacity in mediumsized cities as urban areas that support the flow of urbanization from rural to urban areas;

i. controlling changes in the designation of forest areas for the allocation of development land for the non-forestry sector by considering environmental strength, the character of natural resources, ecological functions, and the need for land for sustainable development;

j. encourage the development of community forests to support adequate forest cover, especially for watershed areas or islands with less than 30% (thirty percent) forest cover; and

k. develop cultivation activities by taking into account the bio-ecoregion which is a landscape located within one or more watersheds. 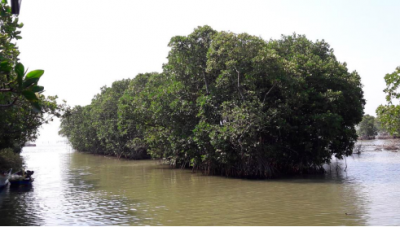 Photo of mangrove in Brebes

In addition, the National Spatial Plan has also defined protected areas where one of the areas in the coastal border and mangrove forest with the following criteria:

a. land along the edge of the sea with a distance of at least 100 (one hundred) meters from the point of the highest sea tide towards the land; or

c. Mangrove forest areas are defined by the criteria of a corridor along the coast with a width of at least 130 (one hundred and thirty) times the average value of the difference between the highest and lowest annual tides, measured from the lowest low tide line towards the land.

Furthermore, zoning regulations for protected areas and cultivation areas are carried out with the following considerations:

a. use of space for educational and research activities without changing the landscape;

b. provisions prohibiting the use of space that endangers public safety;

c. restrictions on the use of space around areas that have been designated as areas prone to natural disasters; and

d. limitation of space utilization which reduces the quality of environmental functions.

a. use of space for green open space;

c. construction of buildings that are limited only to support beach recreation activities;

d. provisions for prohibiting the construction of buildings other than those referred to in letter c; and

e. provisions prohibiting all types of activities that can reduce the area, ecological value, and aesthetics of the area.