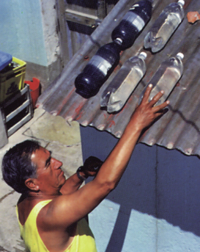 Plastic bottles filled with contaminated water are placed in the sunlight. Photo: SODIS.

Solar disinfection is a simple water treatment method using solar radiation (UV-A light and temperature) to destroy pathogenic bacteria and viruses present in the water. It can be used to disinfect small quantities of water with low turbidity. Most commonly, contaminated water is filled into transparent plastic bottles and exposed to full sunlight. The pathogens are destroyed during the exposure to the sun. Users determine the length of exposure based on the weather conditions.

Other forms of batch treating and continuous treatment of water with sunlight are under development by various organizations.

Exposure to sunlight has been shown to deactivate diarrhea-causing organisms in polluted drinking water. EAWAG/SANDEC (2002) describes the three effects of solar radiation which are believed to contribute to the inactivation of pathogenic organisms:

Many pathogens are not able to resist increased temperatures, nor do they have any protection mechanisms against UV radiation (EAWAG/SANDEC, 2002).

More pathogens are destroyed when they are exposed to both high temperature and UV-A light at the same time. A synergy of these two effects occurs for water temperatures above 50 degrees Celsius (Wegelin et al, 1994).

The SODIS method (and other methods of household water treatment) can very effectively remove pathogenic contamination from drinking water. However, infectious diseases are also transmitted through other pathways such as direct person-to-person contact, food, or unhygienic living conditions. Lack of sanitation and hygiene practices exacerbate the problem. Studies on the reduction of diarrhea among SODIS users show reduction values of 30-80%.

The fact that sunlight can kill micro-organisms has been known for centuries and has been scientifically established.

The idea of solar water disinfection (SODIS) was presented by Professor Aftim Acra for the first time in a booklet published by UNICEF in 1984. SODIS has been promoted worldwide since 1991 when an interdisciplinary research team at EAWAG/SANDEC began laboratory and field tests to assess the potential of SODIS and to develop an effective, sustainable and low cost water treatment method. Solar disinfection is recommended by the World Health Oganization (WHO) as one viable option for drinking water treatment at household level.

Basically the SODIS is suitable for batches of 1-2 litres per bottle. The system is not useful for treating large volumes of water, several are bottles needed for a large family.

Bottles will melt and deform if the temperature reaches 65°C.

The following issues should be considered for SODIS operation:

The bottle can be used as a safe storage container. Requires suitable climate and weather conditions: the most favourable location is between latitudes 15° and 35° north/south; next most favourable location is between latitudes 15° north/south and the equator. PET bottles are abundant in urban areas, but may not be available in rural areas.

Transparent water bottles are filled with water from contaminated sources. To increase the oxygen dissolved in the water, bottles can be filled three quarters, then shaken for 20 seconds (with the cap on), then filled completely. Highly turbid water (turbidity higher than 30 NTU) must be filtered prior to exposure to the sunlight.

Filled bottles are then exposed to the sun. The treatment efficiency can be improved if the plastic bottles are placed on sunlight reflecting surfaces, such as corrugated aluminum or zinc roofs. This can increase the water temperature by about 5°C.

Place the bottles horizontally on a roof or rack in the sun for the following times:

The efficiency of SODIS is dependent on the amount of sunlight available. The bottles must NOT be placed so that they are in shade for part of the day. The most favourable geographical regions for SODIS are located between latitudes 15oN and 35oN (as well as 15oS and 35oS). The majority of developing countries are located between latitudes 35oN and 35oS (EAWAG/SANDEC, 2002). If the water bottles are not exposed to sunlight for the proper length of time, the water may not be safe to drink and could cause illness. If the day is more than 50% cloudy, then it is necessary to expose the bottles for 2 days. If the temperature of the water is more than 50 degrees C, only 1 hour of exposure is required.

After treatment, the water can be consumed. The risk of re-contamination can be minimized if water is stored in the bottles. The water should be consumed directly from the bottle or poured into clean drinking cups. Re-filling and storage in other containers increases the risk of recontamination. Non-pathogenic organisms, such as algae, may grow in the conditions created in a SODIS bottle (EAWAG/SANDEC, 2002).

Users are unable to determine when sufficient disinfection has taken place. Users need to organize a rotation system to ensure they always have treated water and know which bottles have been treated.

Materials and facilities needed are:

There has been some concern over the question whether plastic drinking containers can release chemicals or toxic components into water, a process possibly accelerated by heat. The Swiss Federal Laboratories for Materials Testing and Research have examined the diffusion of adipates and phthalates (DEHA and DEHP) from new and reused PET-bottles in the water during solar exposure. The levels of concentrations found in the water after a solar exposure of 17 hours in 60°C water were far below World Health Organization (WHO) guidelines for drinking water and in the same magnitude as the concentrations of phthalate and adipate generally found in high quality tap water.

Concerns about the general use of PET-bottles were also expressed after a report published by researchers from the University of Heidelberg on antimony being released from PET-bottles for soft drinks and mineral water stored over several months in supermarkets. However, the antimony concentrations found in the bottles are orders of magnitude below WHO [2] and national guidelines for antimony concentrations in drinking water. Furthermore, SODIS water is not stored over such extended periods in the bottles.

Bottles and caps should be cleaned on a regular basis.

Bottles become scratched or aged by sunlight and must be replaced periodically.

Note: Program, transportation and education costs are not included. (*) PET bottles may be free or cost less than US$0.50

The cost of SODIS are very low, re-use of plastic bottles is common. According to a comparative study on the cost-effectiveness of different household water treatment systems, SODIS is the least expensive method with an annual mean cost of US$0.63 per person. 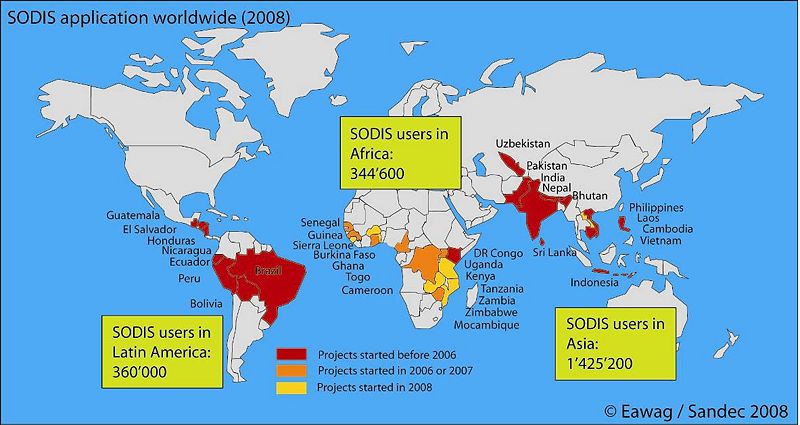 This article is based on a factsheet from Centre for Affordable Water and Sanitation Technology (CAWST), which is gratefully acknowledged.