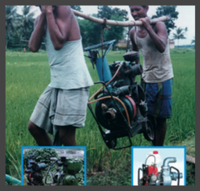 Small and efficient motor pumps refer to diesel or kerosine fueled motor pumps that have a typical size between 0.5 and 2.5 hp, and have been optimized to use as little fuel as possible.

Proper motor pump selection can reduce fuel consumption significantly, which can lead to significant cost reduction. New cost-efficient irrigation pumps are available in countries such as China and India. Chinese 4HP diesel pumps can irrigate 5 ha up to heads of 6 m, consuming 0.45 litres of fuel an hour. Chinese petrol pumps of 1.5 HP pump 3 litres per second and consume less than 0.3 litres of gasoline per hour.

A second issue, which is often overlooked, is the design of the filter screen at the input of the pump. In many cases, a filter screen is used that is too small, which leads to excessive resistance for the water to be pumped through it. This can easily lead to a doubling of fuel consumption for the same amount of water pumped.

A motor pump set can be used on a shallow well or tube well, on a river or other water surfaces. Pumps can supply water under pressure in PVC pipes or lay flat hoses directly connected to the outlet of the pump for the water needs of vegetable, fruit and rice crops.

Pump at Koyratao, next to the Niger River. Photo: Hipponet.nl

Different types of small and efficient motor pumps are manufactured in several countries, such as China and India.

As an example, the Practica Foundation imports a low-cost two stroke, low power (1.5hp) engines from China, which has a fuel consumption of 0,5 litres/hour when pumping 3 l per second from 6m depth. The pump has a suction head of 7 meters depth with a maximum total head of 30 meters. The discharge is at maximum 25 cubic meters/hour, and the pump weighs 15 kilos. At 8 m depth the yield is 8 cubic meters per hour. It can be used to irrigate up to 1.5 ha of land. The price is 130-170 Euro, depending on the country of implementation.

Practica monitors the quality of the product, and can facilitate procurement of these pumps and spare parts from China, the establishment of a dealer network, training of mechanics and general promotion. Practica also has developed an operation and maintenance manual. The low-cost pumpset is used in Madagascar (some 50 units), Burkina Faso (100 units), Nicaragua (70 units), and Chad (50 units). 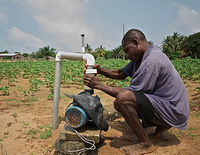 A farmer uses a small pump to irrigate his fields in Keta, Ghana. Photo: Joe Ronzio/IWMI

In India alone, there are more than 6 million diesel pumps. Research on the efficiency of these pumps, which was performed as part of the India-Terai development project, showed that big improvements in efficiency were possible. Technical adaptation resulted in a smaller engine that consumes 50% less fuel and is easier to transport. Improved motor pumps of 2.5 HP could yield as much water as traditional 5 HP pumps. Local industry in India has started to produce these new pumps.