This article is based on a factsheet that makes a plea for a sanitation system approach where technologies are categorised based on their “product-process” characteristics and then linked into logical systems using a “Flowstream” concept. Technologies are grouped and used to construct seven logical systems. This method for organising and defining sanitation systems helps facilitate informed decision making and consideration of an integrated approach.

1. Introduction: the need for a systems approach

Technology choice should be based on determining the best possible and most sustainable solution within an urban or rural context. There is often a prevailing assumption that centralised water-based sewer system can be the solution in all urban and peri-urban contexts. Site specific considerations such as the scarcity of fresh water, farmers’ demand for treated wastewater or excreta-based fertiliser, or lack of technical skill and institutional or socio-economic barriers to such centralised sewer systems are often neglected (Luethi et al., 2011).

The options: to change the basic design or to consider alternative sanitation technologies to take into account the specific on site conditions are often overlooked or not investigated. As a result, in spite of significant investments, a number of latrines are found to be either dysfunctional or malfunctioning and the unsatisfied users have reverted to open defecation or the use of unsanitary pits latrines. In addition, the focus is often on the construction of toilets alone with little consideration given to the management of the generated faecal sludge, including its collection, transport, treatment and possible reuse or disposal.

There is a great need for sanitation practitioners to plan sanitation from a more holistic perspective, for example by considering the entire municipal area and the sanitation chain in order to come up with an overall sanitation concept. A holistic perspective includes components such as technical, (socio-) economic, institutional and financial feasibility studies, consultation with the users in which the whole life cycle of different sanitation options are presented and discussed, quality assurance during implementation, and ongoing institutional support during the O&M phases. Training is another very crucial aspect as even the most inexpensive or sophisticated technologies eventually fail if they are not accompanied by a trained service provider.

One of the challenges for improving sanitation in low and middle income countries involves acquiring a sound knowledge of the wide range of sanitation options to ensure informed decision making. The most feasible sanitation systems and technologies - for the different habitats in urban and rural areas, which can achieve the objectives of improved health, changed hygiene practices, minimal impact on the environment, improved quality of life, and are best suited to the site specific context - can be chosen when decision making is informed.

The main objective of a sanitation system is to protect and promote human health by providing a clean environment and breaking the cycle of disease transmission, as well as to preserve the dignity of users - particularly women and girls. In order to be sustainable, a sanitation system has to be not only economically viable, socially acceptable, and technically and institutionally appropriate, it should also protect the environment and the natural resources (SuSanA, 2008).

A sanitation system - contrary to a sanitation technology - considers all components required for the adequate management of human excreta. Each system represents a configuration of different technologies that carry out different functions on specific waste inputs or waste products. The sequence of function-specific technologies through which a product passes is called a “Flowstream”. Each system is therefore a combination of inputs, function-specific technologies, and products designed to address each flowstream from origin to reuse or adequate disposal.

Technology components exist at different spatial levels, each with specific management, operation and maintenance conditions as well as potential implications for a range of stakeholders. A system can include waste generation, storage, treatment and reuse of all products such as urine, excreta, greywater, organic solid waste from the household and agricultural activities such as manure from cattle at or near the source of waste generation. However, the requirement to effectively contain the wastes and prevent the spread of diseases and the pollution of the environment can often not be solved at the household level alone.

Sanitation systems can be distinguished by:

In the following table seven distinctly different sanitation systems are described based on the categorisation from the EU-funded NETSSAF project (Network for the development of Sustainable approaches of large-scale implementation of Sanitation in Africa). They all have their place and application, and not one of them is perse better than the other.

3. Description and evaluation of technology components 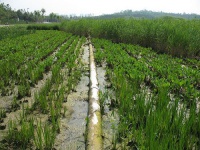 Vertical flow wetland.jpg
In all the recent publications that have described sets of typical sanitation systems (Cruz et al., 2005), (IWA, 2005), (Tilley, Zurbruegg, 2007), (Tilley et al., 2008), (DWA, 2010) a certain procedure was applied to characterise technologies: along with the description of the sanitation system, each technology (or technological component) is discussed and described. The technology is grouped according to its role in the process (i.e. the function that it serves) while on the other hand it is also sub-divided according to the flowstreams that it deals with. The technological components and the complete sanitation systems need to be discussed and evaluated with respect to specific sustainability criteria. Examples for such criteria are given in Table 2.