Planning of Sustainable Sanitation for Cities

This article is based on a factsheet that deals with the planning of sustainable sanitation for urban and peri-urban areas of developing countries and its importance for achieving comprehensive and inclusive sanitation coverage in cities.

The key messages of this factsheet are

This factsheet elaborates on the shortcomings of supply-driven planning and presents three demand-led approaches which recognise that stakeholder involvement is a prerequisite to effective planning. Based on past experiences we propose guiding principles for better sanitation planning in cities of developing countries. 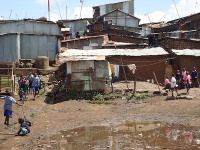 Urban areas.jpg
The United Nation’s International Year of Sanitation 2008 highlighted the need for an enormous increase in the number and use of sanitation facilities in order to meet the MDG target on basic sanitation (to halve, by 2015, the proportion of the population without sustainable access to basic sanitation). Although 1.3 billion people gained access to improved sanitation between 1990 and 2008, the world is still likely to miss the MDG target by one billion people. And even if the target was achieved, 1.7 billion would still remain unserved (UNICEF, 2010)

One of the reasons why the world is not on track to meet the MDG sanitation target is that service provision cannot keep up with the unprecedented growth in urban populations and the increasing socio-economic disparities. While the number of people practicing open defecation declined in rural areas between 1990 and 2008, it increased in urban areas, with the poorest segment of the population being much more likely to practice open defecation than the wealthiest (WHO/UNICEF, 2010).

The daunting task of improving global access to sanitation is complicated by the fact that conventional technologies such as pit latrines or sewer systems that discharge into local water bodies are often not environmentally and economically sustainable (SuSanA, 2008). To address these tremendous challenges, improved approaches for planning and implementation of sanitation infrastructure and services are urgently needed.

Planning in its most general sense is about decision making and can be defined as “a process of making choices among the options that appear open for the future and then securing their implementation” (Roberts, 1974).

Ever since the beginning of urban civilisation 5000 years ago, humans have to some extent been planning urban environments and their corresponding services and infrastructure. Since the 19th century, urbanism and urban planning have developed into a field of knowledge and practice whereby the city is viewed as an object for study, intervention and control.

The full range of urban sanitation problems is not discussed here, as this is the focus of the thematic paper “Sustainable Sanitation for Cities” (Panesar et al., 2008).

The principles of planning that continue to dominate the thinking of urban and infrastructure planners and political decision-makers in the South are based on the concept of “manageable towns”. Today, however, large parts of cities in developing countries are completely neglected by mainstream planning. The majority of urban populations live in informal, unplanned settlements which are often considered illegal or unauthorised and only tolerated at best. The combination of the pace and scale of urban population growth in developing countries is undermining the efforts of city and municipal administrations to plan and guide urban development.

Current practices of town planning tend to be dominated by top-down, technocratic approaches which are excessively restrictive, divorced from reality and oblivious to the present and future needs of poor citizens. This type of planning is adopted in the so-called Master Plan or Comprehensive Development Plan approach. Experiences from the last few decades have shown that the implementation of master plans rarely keeps pace with the development of new areas. The practice of planning lags behind what happens on the ground: first, there is occupancy or squatting; second, construction; third, “informal” planning of basic infrastructure; and fourth, normative regularisation.

There are other problems with a top-down, technocratic planning practice:

The traditional planning approach to urban sanitation infrastructure has been one in which planners and engineers assess the needs of a given area, and then decide what type of service will be provided. A common failure of planning and implementation in the past, was the failure to take into account the needs and conditions of the users of the sanitation facilities as well as of other important stakeholders (land owners, financial institutions, users of wastewater or other products generated from sanitation systems).

Government and donor agencies generally continue to rely on supply-driven approaches that have distinct drawbacks (Wright, 1997):

In the past decade, several new multi-stakeholder and partnership approaches have been developed and tested. These will be focussed on in the following section.

There are three important approaches to sanitation planning for urban and peri-urban areas of developing countries which recognise that stakeholder involvement is a prerequisite to effective planning, and seek to overcome the shortcomings of top-down and supply-driven approaches. Whilst the following paragraphs only provide an overview, the factsheetgoes more into detail (WG 6 pp 3). 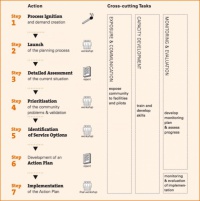 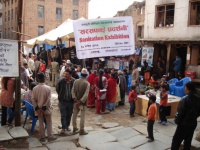 When planning for the complex realities of the one billion people currently living in informal urban settlements worldwide, some radical rethinking is required. This factsheet maps out the key issues that need to be addressed in order to achieve progress in replicating good practice and moving to scale. Some key issues and pointers for adopting successful planning approaches are summarised below.

Stakeholder assessment, institutional mapping and regulatory review tools of analysis are effective for analysing existing power relationships and vested interests in an urban context. Understanding the dynamics and the regulatory environment of an urban setting is a prerequisite for producing informed planning solutions. This means being aware of and trying to work against corrupt practices by promoting the greatest possible transparency of planning decisions.

All of the above planning approaches underline the importance of stakeholder participation. It is of great importance to empower local people through raising their skills and capacities. The key issue here is information sharing from the outset of any project or programme.
There are three capacity components which should be developed for improving participation and action. These are (Goethert, Hamdi, 1997):

Good partnerships and participatory programmes begin when actors come together to achieve a common goal based on agreed priorities. Of great importance is developing local champions at community and municipal level which can drive the process forward. Wherever possible, one should utilise participatory action planning methods to converge the interests of stakeholders and to pool resources, and effectively incorporate them in the project objectives. It should be noted however, that partnerships are not always easy and that it takes considerable effort and time to maintain them and to keep them going over time.

Waste should be considered as a resource and its reuse should be encouraged from the very start of any planning process. Examples for reuse or “productive sanitation” are greywater reuse, production of biogas, liquid fertiliser or soil conditioner, composting etc. (Gensch et al., 2012). These technologies may also be less energy intensive and have lower capital and operation costs than other end-of-pipe solutions which are purely disposal oriented. Testing of pilot technologies can be the first step in convincing users about safety, advantages and convenience.

e) Be realistic about the complexity of sanitation interventions

Lacking political will, unclear land ownership and tenure, as well as technical, financial and institutional challenges of providing affordable and manageable sanitation solutions for dense, informal settlements have been the main reasons for low coverage to date. To move forwards, initiatives should aim for the “unbundling of interventions”: breaking the plan into projects that can be implemented separately and incrementally. There is a trade-off to be made between short-term “quick fix” solutions versus long-term sustainable infrastructure improvements.

f) Understand the drivers of sanitation

We should recognise that sanitation improvements have many drivers and sources of motivation – not only the existing sector institutions and their agendas, but also individual aspects such as customs and habits, context specific practices, social status, or the demand for reusable products such as fertiliser from sanitation systems. To bring urban sanitation coverage to scale, new innovative tools like social marketing, Urban Community-Led Total Sanitation campaigns and public-private partnerships must be adopted and applied in a context-specific manner. This is discussed further in the SuSanA factsheet on public awareness and sanitation marketing.

The concepts presented in this factsheet have formed the basis for a more extensive book entitled “Sustainable sanitation in cities: a framework for action” by the same authors which was published in 2011 (Lüthi, 2011b).